City Council’s Transit-Oriented Development Bill Is A Great Start. Here’s How To Make It Better.

The proposal (Bill 170162) would create a series of transit-oriented development (TOD) zoning overlays around various subway stations on the Broad Street and Market-Frankford Lines. Inside those zones, taller buildings with lower parking requirements would be allowed by-right, and there would be requirements for active ground-floor uses (storefronts), and prohibitions on certain uses like surface parking lots, all with the goal of creating more housing for transit riders within walking distance of stations.

TOD zoning has been catching on in progressive cities around the country as a way to boost the share of transit-accessible housing, grow transit ridership, reduce car traffic congestion, and support more walkable retail corridors in neighborhoods near transit stops.

A TOD Overlay provision was created in the 2012 zoning reform push, and the Planning Commission has recommended several TOD overlays for various subway stations, but City Councilmembers have so far declined to create any. This bill aims to get that conversation started again, and there are several good reasons why now is the right time to prioritize this. 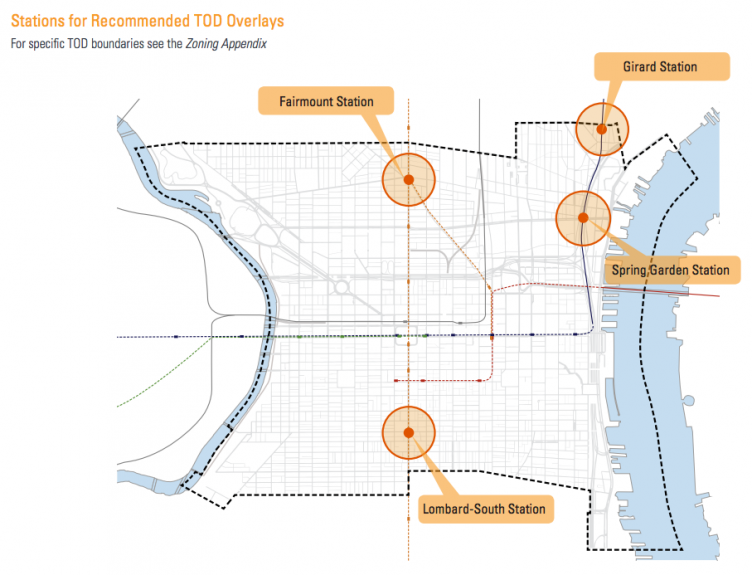 SEPTA recently reported a decline in ridership for 2016 and it wasn’t only due to the regional rail mess or the transit strike. Bus ridership declined by 7%, resulting in millions of dollars in lost revenue that will ultimately be carried by the City and state. Creating generous TOD zoning overlays around subway and regional rail stations costs the public nothing, while growing transit ridership and strengthening SEPTA’s finances–all without a fare increase or increased subsidies from the City.

The TOD bill also has an important tie-in with affordable housing policy. As organizations like the Center for Neighborhood Technology have pointed out, it doesn’t make any sense to think about housing affordability in isolation. You can buy an inexpensive home in the middle of nowhere, but blow all your house savings on higher transportation costs because you have to drive everywhere.
CNT came up with an H+T Index showing the “location-efficient” sweet spots where housing and transportation costs are both reasonable. They suggest a definition of affordability for Philadelphia where combined housing and transportation costs are under 43% of Area Median Income. The lighter areas of this map are the location-efficient areas of Philadelphia where the cost of living is lower, and the darker areas are places that need some policy attention (like this transit-oriented zoning bill) to bring H+T costs down. 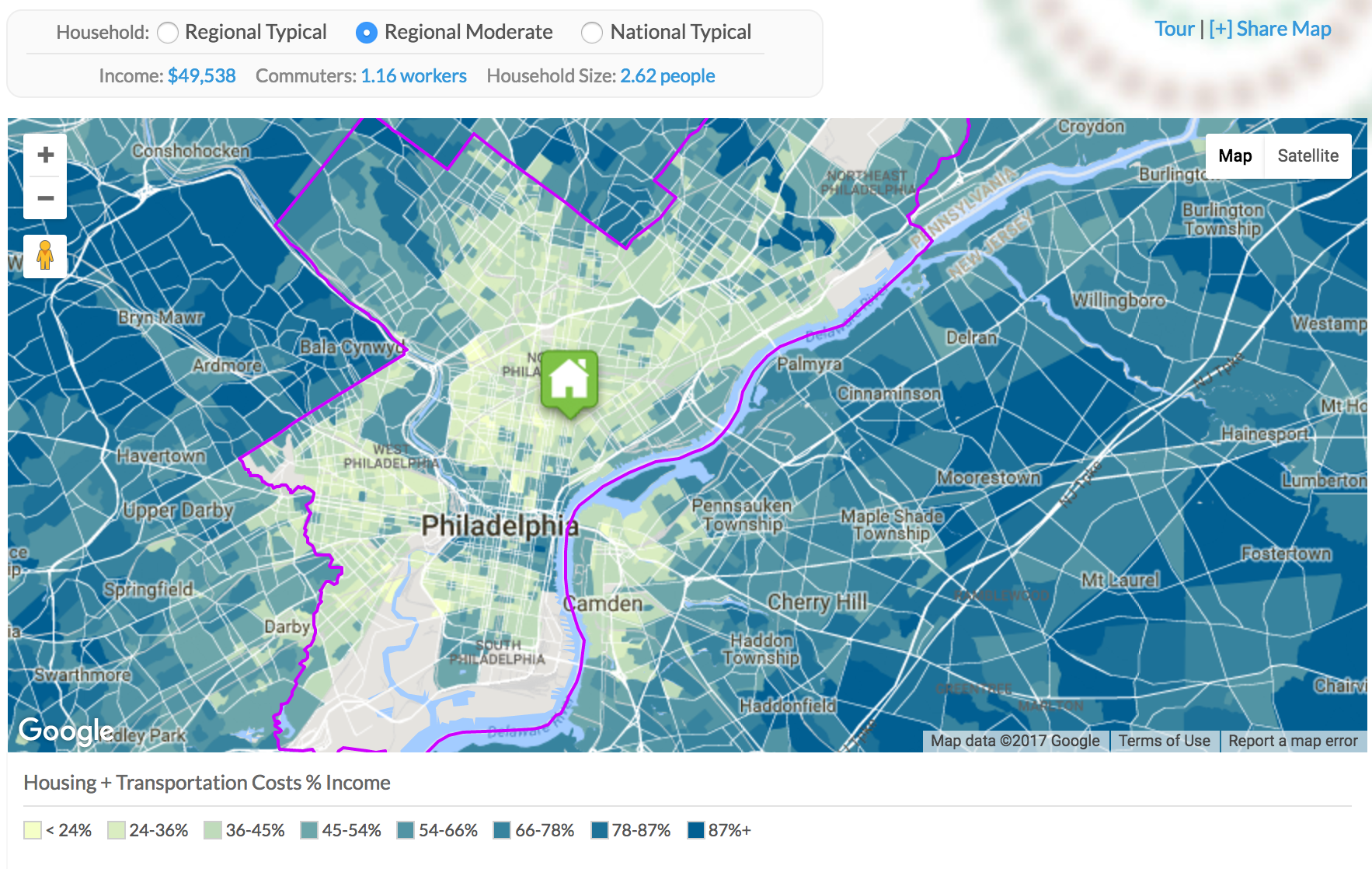 Land values near frequent transit service have been growing in Philadelphia in recent years as new arrivals have been more likely to prioritize transit access in their housing choices, and one way to keep transit-accessible housing affordable is to spread those land costs across more dwellings through upzoning.Unfortunately, some Councilmembers have been doing just the opposite. With little fanfare, Mark Squilla and Kenyatta Johnson irresponsibly allowed the South Broad Street Neighborhood Association to downzone most of South Broad below Washington Avenue for single-use single-family residential, despite oodles of unused transportation capacity on the Broad Street Line to serve a mid-rise, mixed-use corridor. The transit-oriented development overlay bill is a perfect opportunity to revisit that short-sighted decision.

While it’s great to see Council revisiting this idea, the execution leaves some room for improvement. For one thing, 500 feet is way too stingy. TOD overlays in our peer cities are typically somewhere between 1,300 and 2,700 feet. Philadelphia can do better than the nation’s weakest TOD policy.

The Temple subway station illustrates the problem well. Just a few years ago, Cecil B. Moore station near Temple and 46th and Market in West Philly were both targeted for potential Transit Revitalization Investment Districts, and Interface Studio actually won an award for their plans–plans that were never implemented.

As you can see, the 500-foot radius (the smallest circle) doesn’t even extend to the end of the block, and there are approximately zero development opportunities within this zone. This was planned to be the city’s premier transit-oriented district, but nobody would actually be able to build anything because the overlay is too meager.

The 1,300-foot circle (middle ring) opens up some more opportunity sites, and the half-mile (outer ring) offers the most. Ideally, Council would consider walking distance as the metric. A 10-minute walk is generally the rule-of-thumb for the distance people are willing to walk to the train station, pointing to a half-mile radius being the best choice. 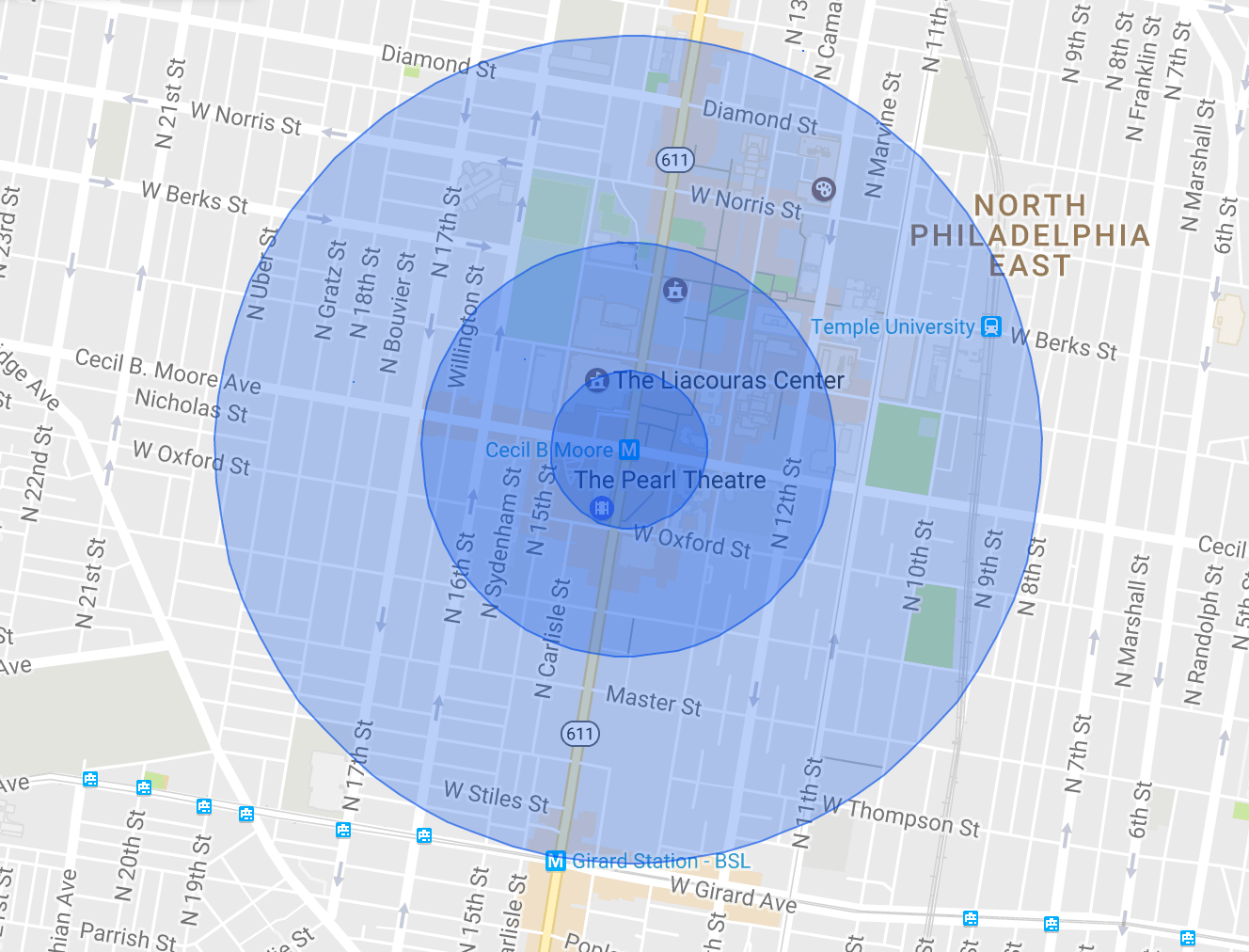 Here are a few other station areas that the Planning Commission recommended for TOD overlays in the Philadelphia 2035 plan, which Council so far has not acted on. 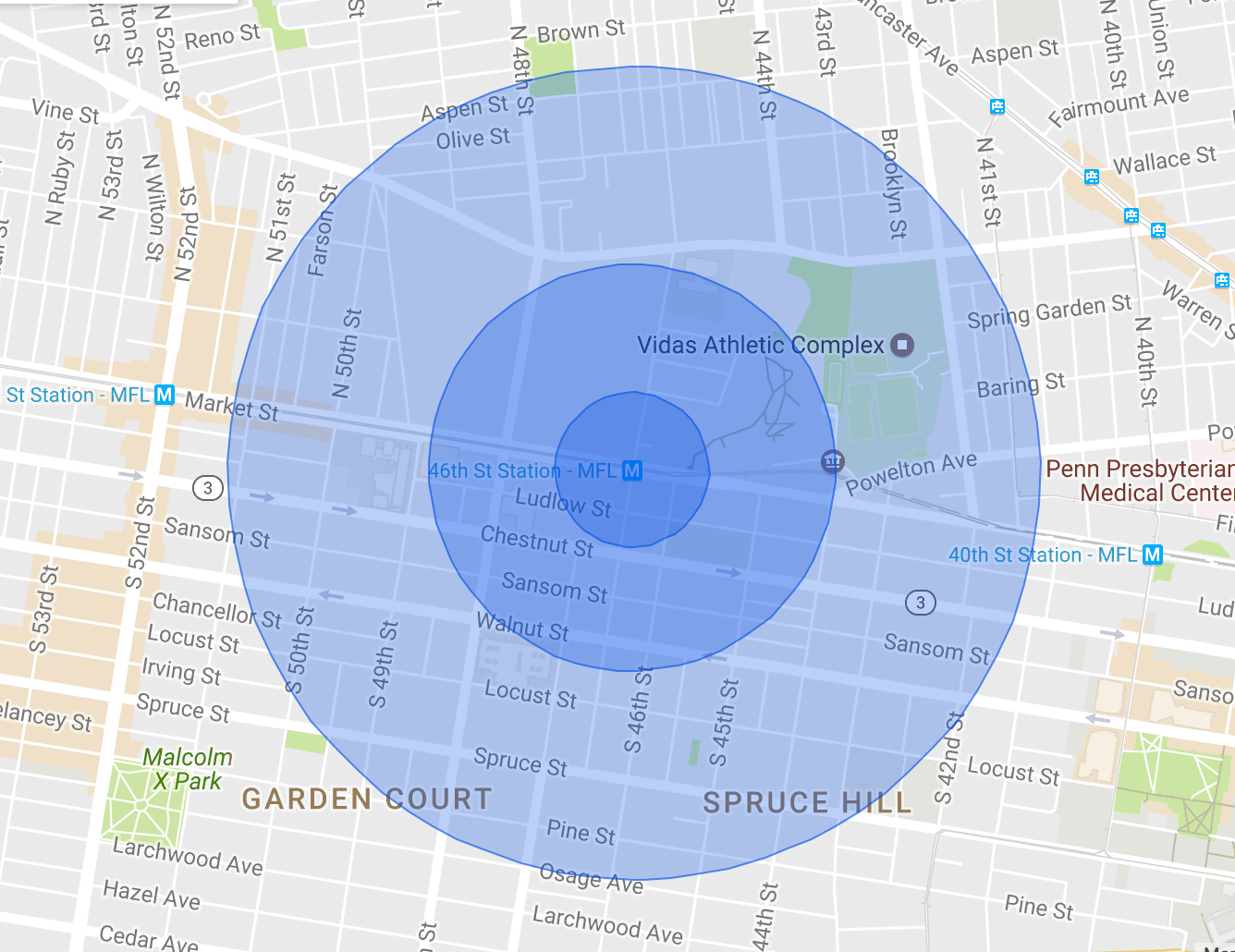 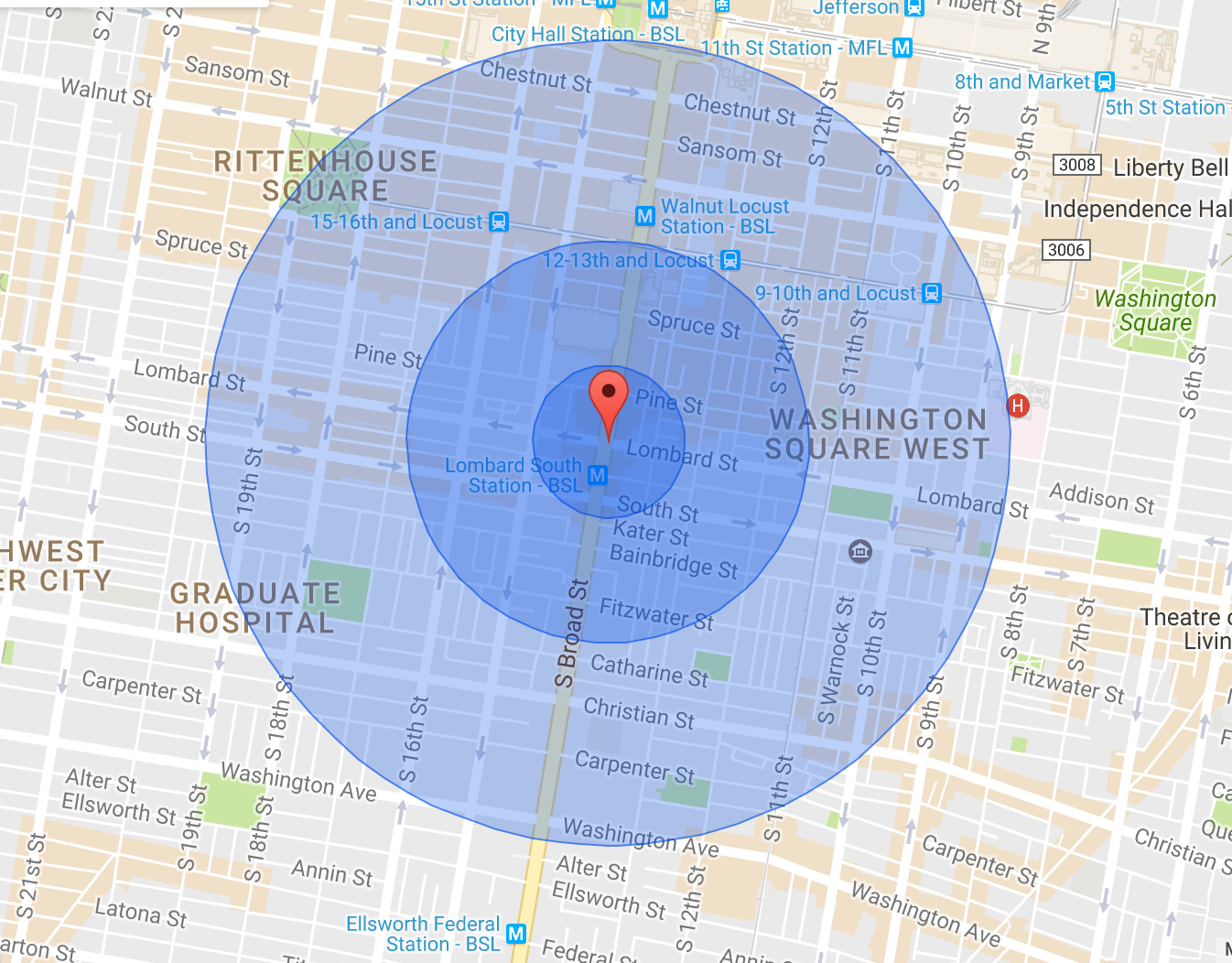 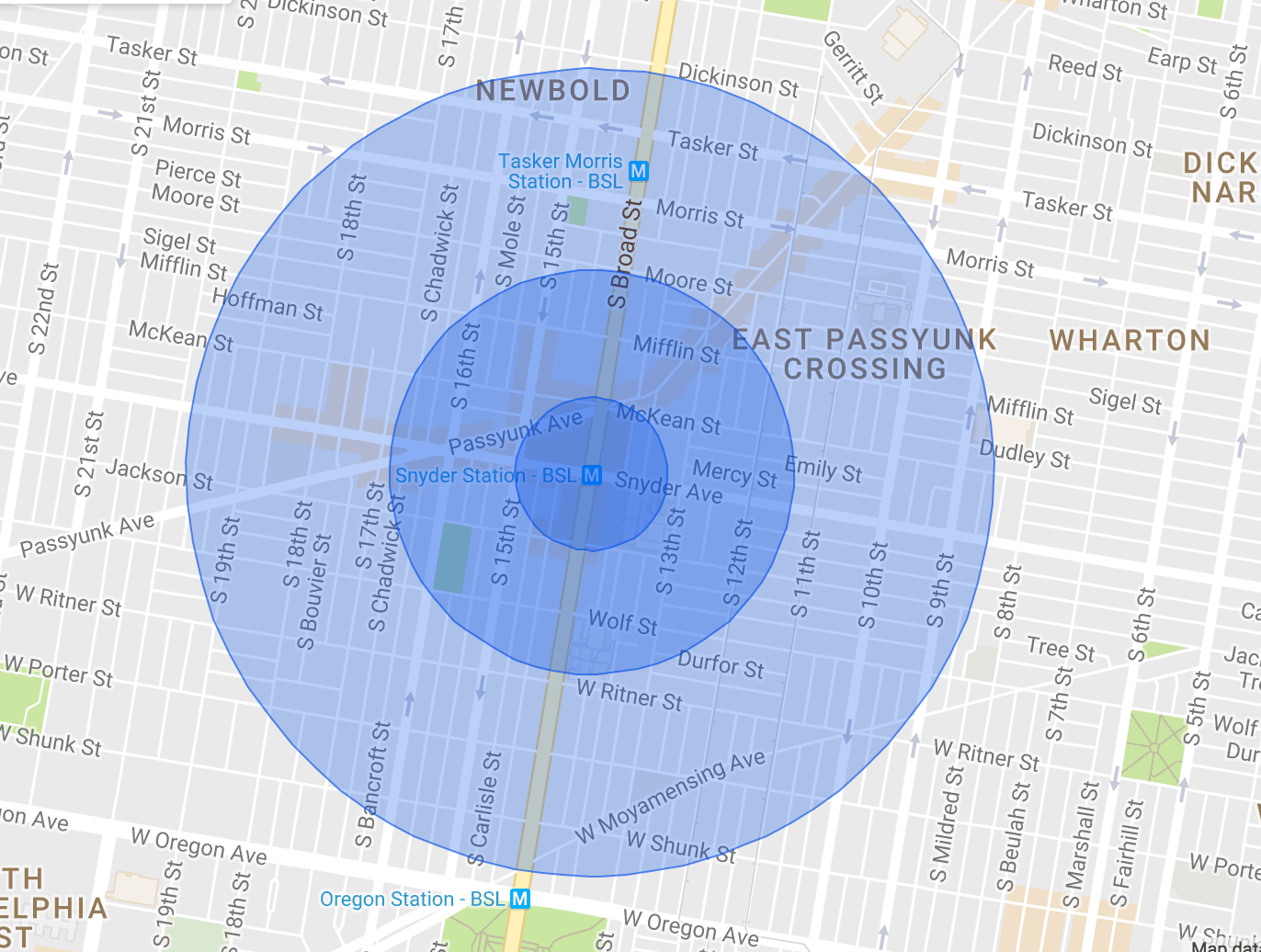 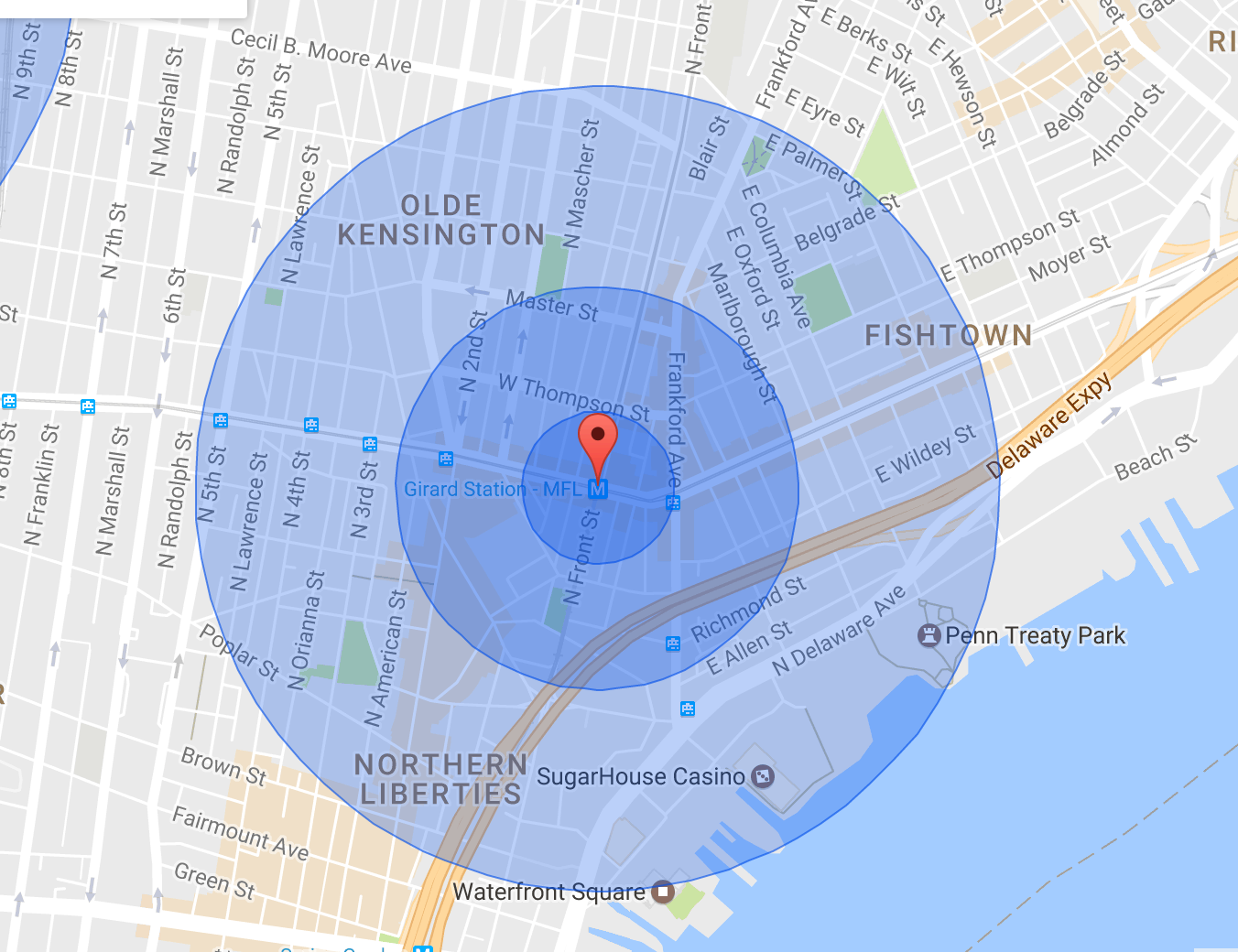 Another problem with the bill as written is that the TOD overlay only cuts minimum parking requirements in half, instead of fully eliminating them. Progressive cities across the country have increasingly been eliminating parking minimums in their base zoning, recognizing that they are regressive, increase housing costs, and act like fertility drugs for car dependence.

Parking minimums don’t belong in our base zoning, but they especially don’t belong in our TOD overlay, which should prioritize space for people who will mainly be using transit. Councilmembers could remedy this problem by increasing the Gross Square Footage exemption for parking minimums, or even better, they could just eliminate any parking requirements within the zone.

Finally, this bill addresses a series of citywide problems and opportunities, and it deserves citywide legislation. Since zoning is involved, there is a temptation to leave it up to District Councilmembers to choose stations on an ad hoc basis, and that’s exactly what the bill does. The actual TOD stations are left blank, and it will be up to Councilmembers to opt-in certain stations.

Recognizing that there’s no dislodging Councilmanic Prerogative from this, the bill should automatically opt-in stations for transit lines with a dedicated right-of-way (Market-Frankford Line, Broad Street Line, Regional Rail) and let District Councilmembers make the case for opting-out some specific stations if they wish. The legislation should start with the assumption that all of our heavy rail infrastructure deserves ridership-friendly zoning, and District Councilmembers should have the opportunity to publicly make the opposite case for certain stations if they feel strongly about exempting certain stations.

If the point is to do something good for the whole transit network, that’s not going to happen if it’s effectively left up to individual civic associations whether they want to volunteer their local transit stop for some taller buildings with less parking. It’s important to keep the citywide interest in focus throughout the process, otherwise the bill isn’t likely to do much about the problems Council is trying to solve.